How to use git hooks to automatically deploy site content

It’s pretty common to use git to host your website files. There are a few different ways that you can use git itself to automate the deployment of site updates, depending on the specifics of your git hosting situation. The below methods should cover the vast majority of git-based workflows, at least if you’re self-hosting Publ.

Regardless of your actual git hosting situation, you will need a deployment script, which does a git pull and performs different tasks depending on what’s been updated. Save this file as deploy.sh in your website repository, and make sure it’s set executable:

The remainder of the deployment process depends on how you’re actually hosting your git repository.

On your webserver, create a private bare git repository wherever you want it; for example, on the server, run:

On your local repository (i.e. where you’re actually working on your site) add the bare repository as your remote:

If you keep your git repository on a separate server from where it’s deployed to, set up an ssh key or other authentication mechanism other than password so that you can do passwordless ssh from the repository server to the deployment server, and then add this as a post-update hook on the repository:

replacing DEPLOYMENT_SERVER with the actual server name, and example.com with the directory that contains the site deployment.

If you don’t have the ability to run arbitrary post-update hooks but do have some sort of webhook functionality, you can add a webhook to your Publ site to run deploy.sh; for example, you can add this to your app.py:

Then, in whatever mechanism you use to run the website, set the environment variable REDEPLOY_SECRET to some secret string. For example, if you’re using a systemd service, add a line like:

Deploy these changes to your website and restart it. Now you can configure a webhook on your git repository that sends a POST request to the /_deploy route with the secret parameter set to your REDEPLOY_SECRET key.

If you’re using GitHub (or something GitHub-compatible) to host your site files, there is a more secure way to run a webhook.

Next, add the following to your app.py somewhere after the app object gets created:

Now, set up your deployment to have an environment variable called GITHUB_SECRET set to some random, unguessable string. Do a manual redeployment.

Finally, go to your GitHub repository settings, then “Webhooks,” then “Add webhook.” On the new webhook, set your payload URL to your deployment hook (e.g. http://example.com/_gh), the content type to application/x-www-form-urlencoded, and the secret to the value of your GITHUB_SECRET string. It should look something like this: 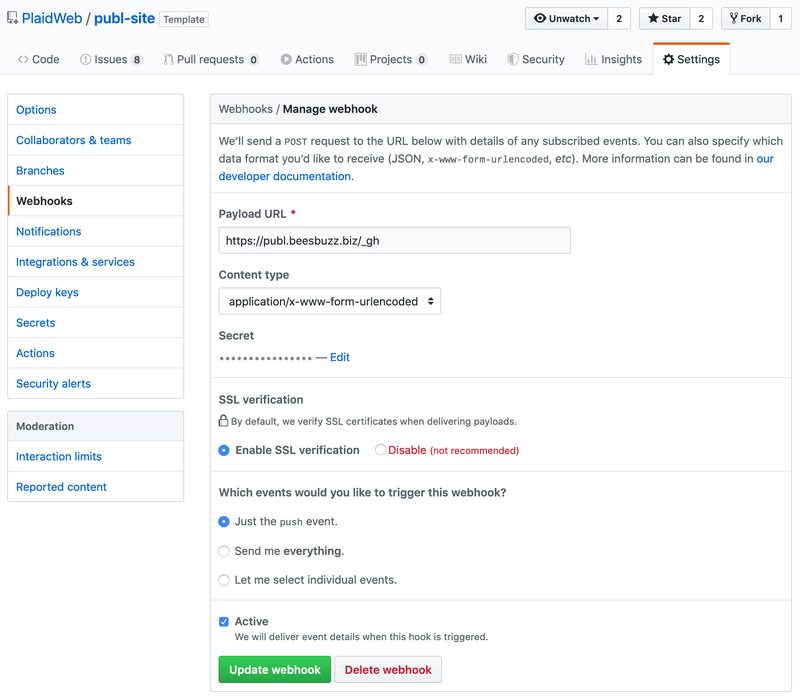 Anyway, once you have it set up, every time you commit to GitHub, your site should automatically pull and redeploy the latest changes.

An example of this in action can be seen at the files for this site; in particular, see the app.py and deploy.sh files.

Generally you can fix this by going into your live repository and doing git status to see what’s changed, and a command like git checkout . && git pull or git reset --hard origin/master will sort everything out (but be sure not to lose any changes you meant to make directly on the server).

Webhook is timing out

If your packages change, the webhook will likely time out while poetry install runs. This should be okay, but try sshing into your live workspace and running ./deploy.sh manually.